The Portland Trail Blazers‘ seemingly unlikely playoff run came to its expected end on Saturday, as the Damian Lillard-less club fell to LeBron James and the top-seeded L.A. Lakers 131-122 to lose their first-round series 4-1.

During the game, though, future Hall of Famer Carmelo Anthony still managed to put a suitable cap on his comeback campaign with Portland by going full-on vintage ‘Melo, scoring 27 points in 40 minutes of play.

After the game, Anthony expressed his desire to play again next season, stating his belief that he had “found a home” with the Blazers. He even went so far as to say, “I pray that it can be Portland.” Watch the video below.

“I pray that it can be Portland, I think I found a home in Portland”

Although Anthony definitively proved that he can still perform at a high level, particularly on the offensive side of the ball, Portland would be making a huge mistake if it brought him back next season to rely heavily on him once again.

Anthony’s status as one of the greatest scorers ever to grace the court in the NBA is not in doubt. Over 17 years in the association, the former No. 3 overall pick has scored more than 26,000 points (he currently ranks 15th in NBA history in that department) and won a lot of basketball games. He’s also been a force on the international scene, winning three gold medals with USA Basketball.

However, after a somewhat disappointing one-year stint with the Oklahoma City Thunder in 2017-18, he was traded, released, and then signed by the Houston Rockets as something of an experiment.

The experiment ended poorly the following year, as the Rockets essentially sent him home after just ten games. Although he was eventually dealt to the Chicago Bulls, the team quickly waived him, and he was unable to catch on with any of the league’s contending teams.

At that point, the popular opinion was that Anthony was finished as a player. His stay in basketball purgatory continued into this season until a scuffling, injury-plagued Portland club decided to take a flier on him. The move ultimately played a large part in saving their season, as Anthony went on to start in 58 games–averaging 15 points and five boards–and help the team capture the West’s final playoff spot with a strong showing in the NBA’s Orlando bubble.

Anthony’s career had officially been resurrected. Here’s a look at some of his best moments: 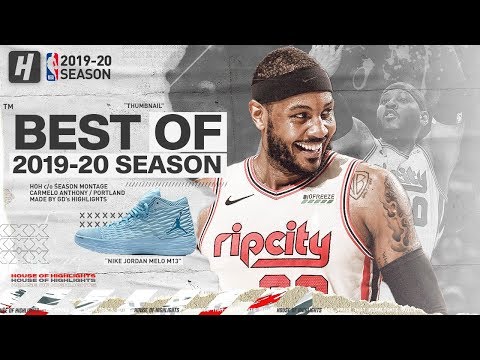 While there’s no denying what Anthony was able to accomplish this season, is it worth it to bring him back in the same role next year?

Sure, the Blazers were able to sneak into the playoffs after a poor start to the season, but they still widely underperformed in comparison to their expectations. They finished with a losing record on the year.

With the Grizzlies and several other fringe playoff teams in the West getting better all the time, running back the same combination next season definitely won’t result in a better (or even the same) result. Even if it did somehow, Portland should be pushing for title contention while Lillard and CJ McCollum are still there–not mediocrity.

Anthony is 36 years old and has played almost 43,000 career minutes between the regular season and playoffs; there’s nowhere to go but down when you’re talking about a player with that kind of mileage. He did wonders to transform his body and stay a healthy, productive member of the Blazers rotation in ’19-20, but the odds of him doing it again next year are not in his favor.

During Portland’s series against the Lakers, Anthony was by far the team’s most negatively impactful player. The Blazers were 25.6 points per 100 possessions better when he was on the bench compared to when he was playing over the five-game stretch. It goes to show that even a spry, fit ‘Melo is probably a lot better in much smaller doses.

Time for a Change

Again, you can’t take anything away from Anthony after the year he had. While time has done to him what it does to every great player, there’s still gas left in that tank. He deserves to be on an NBA roster next season and beyond if he wishes.

But if the Portland Trail Blazers want to get better, they can’t have Carmelo Anthony starting and playing 30-plus minutes every night… if they bring him back at all.

From the CUDA cores count and SMs count from the die shot. Automotive Orin…

Pindrop: Only 34% of call centers are prepared to fight fraudsters