The Dell Latitude 9510 2-in-1 is a business laptop that just won’t quit. Seriously: With nearly a full 24 hours of battery life, it just keeps going and going.

Intel and Dell engineers architected the Latitude 9510 as a ”Project Athena” laptop, optimized for responsiveness and battery life. It certainly ticks those boxes. Dell bills the Latitude 9510 as a productivity machine, but you probably don’t know what our review units are loudly telling us: The audio subsystem is also among the best there is.

This review is part of our ongoing roundup of the best laptops. Go there for information on competing products and how we tested them.

Dell ships its Latitude 9510 in either clamshell or 2-in-1 form factors; we received the latter option. The differences between the two are slight. The 2-in-1’s display includes an anti-reflective and anti-smudge coating, with active pen support, and it weighs a little more, at 3.3 pounds compared to 3.1 for the clamshell.

The review unit we received was a build-to-order model, with a list price of $4,038.57 discounted to $2,827 from Dell.com as of this writing. Prices begin at $1,899, and options range from dual- and quad-core 10th-gen Comet Lake processors (with a vPro option coming); up to 16GB of LPDDR3 memory, and SSDs up to 1TB, including one self-encrypting model. For WWAN, you have the choice of either a Snapdragon X20 (LTE) or a X55 (Global 5G) modem, plus a SIM tray. A contact smartcard reader and fingerprint scanner underneath the power button are other notable options.

Here are the specs for our review unit:

The Latitude 9510 is a convertible built to be durable with a CNC machined aluminum chassis. The 360-degree hinge is particularly no-nonsense, swiveling smoothly from tablet to tent to clamshell modes. On paper, 3.3 pounds doesn’t seem especially heavy, but the bulk of the weight is distributed behind the keyboard.

Dell follows the recent trend other notebooks have pioneered: Shrink the existing screen bezel, and presto! The screen size expands. Dell claims the Latitude 9510 offers a 15-inch laptop inside a typical 14-inch chassis, and if you’re a bit generous, that’s true: Dell’s 14-inch Latitude E7440 measured 13.30 inches across, and the 15-inch Latitude 9510 measures 13.39 inches in width. The 1080p touchscreen bezels have shrunk to about an eighth of an inch on the sides, a quarter of an inch on the top, and a half-inch chin at the bottom.

We measured the Latitude’s touchscreen display at a very bright 489 lux. Interestingly, Dell offers an “adaptive color” option in addition to Windows’ own “night light” controls. Both dial down the blue light emitted by the laptop display. Dell, however, does it automatically, something that users prone to frequent migraines might consider a benefit. While the color fidelity of the internal display seemed fine, it projected a yellowish cast while outputting to an external display.

The 2-in-1 version ships with Dell Active Pen support, too; the two-button Pen includes a standard AAAA battery, and there’s no cubby to store the pen when not in use. A small lanyard helps keep it connected, though.

The Dell Power Manager utility offers performance and cooling options, from the default Optimized setting through Quiet, Cool, and Ultra Performance modes. The latter two spin up the system fan, which tends to run frequently, though quietly. A bit of buzz creeps at times, and is more detectable when the laptop is under load.

The Latitude 9510’s port selection is good, if not quite as generous as that of some competitors. The two Thunderbolt ports come in particularly handy, because the Latitude reported a “slow charging” error when connected to my Thunderbolt dock. Plugging the charger into the other port solved the problem. The Dell Power Manager utility mentioned earlier helps out here: You can manage charging from the default “Adaptive” setting, letting the system manage it for you, aggressively “ExpressCharge” it, or leave a bit of overhead with the “Primarily AC Use” setting. Using ExpressCharge, it charged just about to 50 percent in slightly less than an hour.

In fact, I love Dell’s utility software just as much as Lenovo’s Vantage, still the gold standard. Dell breaks out the general system functionality into its Power Manager, Optimizer and Command | Update apps, leaving the defaults in “set it and forget it” modes for charging, battery life, and the like. Wonks can dive down and tweak things as they like. We’ll talk more about these apps as they come up.

We didn’t review the Latitude 9510 with the security-oriented vPro option, though that’s coming later. Interestingly, a Dell representative confirmed the Latitude 9510 doesn’t qualify as a secured-core PC yet. Microsoft apparently allows PC makers to self-certify, however, so that designation will come soon.

A good, not great, keyboard

There are two levels of keyboard backlighting, neither particularly powerful, though without excessive light bleed, either. The power key hides in the upper right-hand-corner. A user-facing depth camera can be used for biometric logins.

Dell’s Latitude 9510 offers the best laptop audio system I’ve ever heard, bar none. We’ve been offered some notebooks with superior speakers over the past few months, but the Latitude 9510 could legitimately step in as a replacement for a decent Bluetooth or smart speaker setup. The volume booms out boldly from the upward-facing speakers on either side of the keyboard, with a rich, well-rounded low end and good tonality up and down the volume range. Dell doesn’t use the same four-speaker setup as in the Dell XPS 15 9500. Dell told us that there are just the two top-firing speakers in the 9510, but they come with a built-in amplifier.

That doesn’t mean it’s perfect. My eye twitched a bit when I had to fish through to the Windows 10 Settings menu to find an audio slider or the ability to switch speakers, because Dell hides those controls. (The F2 and F3 keys can be used to adjust the volume, too.) Dell uses the Waves Nx Dimension audio technology to bolster its own presets for anything from a quiet room to a noisy office, via audio controls hidden within the Dell Optimizer app. This seemed to work quite well against the aural backdrop of my own family, at least, since a conference room wasn’t available.

Waves makes a significant difference. Turning off the audio enhancement, or turning on and off the 3D audio capabilities, tweaks the aural experience noticeably—it makes a good audio experience, great. But that’s not true in all cases. Music sounded wonderful when played back with 3D sound enabled. But when I watched our test movie played back using headphones, dialogue sounded artificially resonant, like it was played back in a large warehouse. By default, Waves also asks you what sort of headphones you’re plugging in on every attempt, which can become annoying. In all, Dell’s Latitude offers an aural experience certainly a bit below that of an audio-first smart speaker like those produced by JBL or Harman Kardon, and that’s a compliment.

Then there’s the webcam

In contrast to the speakers, the Latitude 9510’s user-facing camera is decidedly subpar. The 720p resolution is all you’ll find on most laptops, but in this case it seems worse than average. Both photos and video offer no more than 720p resolution, and I never felt like my face was particularly well lit. HDR mode appears to be completely ineffective. I also don’t like the pinprick white LED that notifies you that the camera is live, as it’s only totally visible while leaning to the right. Even leaning slightly lift lessens its brightness to the point that it looks like just a random reflection. There’s no physical shutter, either.

On the other hand, Dell does use the depth camera and its “proximity sensor” to excellent effect, a feature that’s part of its Dell Optimizer utility. If it’s enabled, the system will always “look” for you. Walk away and the laptop automatically locks, and the screen dims and turns off. But the Latitude will constantly look for your presence (or that of anyone else in the area). If it detects a person, the system will wake and Windows Hello will kick in. That, in turn, will allow you to “instantly” log in.

I like most of this. Automatically locking the system is a handy feature even in an office with trusted coworkers. Still, I’m not personally offended if I need to tap the laptop’s space bar, wait a second or two, then log in with Windows Hello. I imagine in a busy office (not now, stuck at home) the proximity sensor might trigger rather frequently.

One interesting feature of the Dell Latitude 9510 is a “performance optimizer” that promises to optimize your most frequently used or resource-intensive applications, prioritizing them and apparently improving their performance. It takes some time for applications to be “learned” and then optimized. We never really saw a measurable impact on performance on the Microsoft Edge browser it quickly learned. (Dell says that the performance advantage should be between 4 percent to 35 percent.)

We saw a significant performance dip after optimizing our Cinebench benchmark with the performance optimizer tool, however, as it appeared to turn off hyperthreading. We reported the glitch to Dell, who recommended re-enabling hyperthreading in the BIOS. We did so, but performance numbers didn’t return to the levels we tested at without a factory reset. (Dell told me that simply deleting the profile would have worked, too, though by then I had already reset the laptop.) On the other hand, every business application that we threw at it, as well as our YouTube 4K/60 video test stream, ran flawlessly without being optimized.

We’ve compared the Dell Latitude 9510 to a range of laptops, showing how it compares to the Dell XPS 13—more of a gaming laptop—as well as the thin-and-light Acer Swift 3, powered by the top-notch Ryzen Mobile 4000 chip. Lenovo’s ThinkPad X390 appears here, as well as a pair of recent Dynabooks. We’ve also compared it to the Surface Laptop and recent Surface Book 3, which add a prosumer feel.

First up is PCMark, whoses tests simulate the actual performance of the laptop in an application environment. Work measures the laptop’s ability to process spreadsheets and handle video calls, while the Creative leans more heavily on its ability to edit still images and video, as well as some gaming. The Latitude 9510 posted one of the faster scores in both cases. 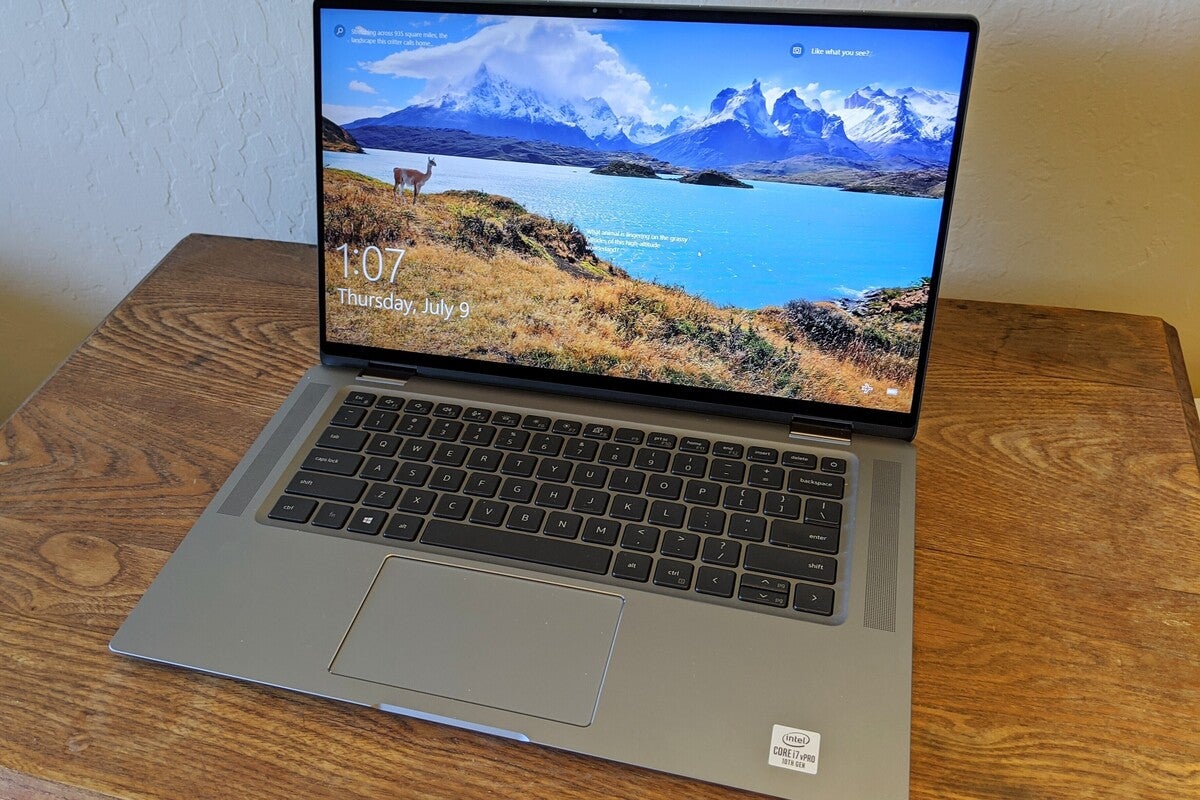 Memfault (YC W19) Is Hiring Engineers in Boston and Berlin

Management by metrics leads us astray