Tech reviewers have seen it for a while now that Intel (INTC) has been lacking in the consumer-focused market, and with AMD’s (NASDAQ:AMD) Epyc 7742, Intel started to lack in the server CPU market as well. 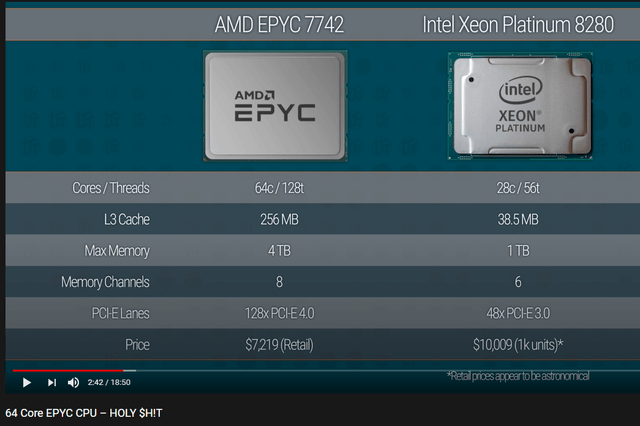 Higher core count provides more computing power, and if the workload is distributed evenly across cores, power consumption can also be significantly reduced.

This, in part, shows that Intel lacks technologically, but also with AMD’s much lower “price per processing,” customers are dragged away from Intel and towards AMD.

Intel is not looking forward anymore; they are just looking left and right at what their competitors are doing. In Intel’s Blueprint series, they mentioned the word “competitor” 27 times and “AMD” 12 times. I had the feeling that while watching the event, I learned more about Intel’s competitors than about Intel’s new chip.

During Nvidia’s (NVDA) RTX 30 Series keynote, they did not mention Intel, AMD, or any other competitor even once. They compared their new RTX series solely with their own chips.

AMD mentioned “competitors” eight times during their CES 2020 conference. While watching AMD conferences, it feels more like AMD is honestly enjoying showing their products to provide a better experience to their customers. They compare their chips with their older generation chips, and the majority of their performance metrics are based on their products.

At least that’s what I interpret from their presentation and how the broader market perceives their actions.

From 2010 to 2018, Intel had a monopoly on processors throughout the PC universe. They made themselves comfortable with their monopoly positions, representing itself in small incremental improvements in their CPUs. I guess that they missed the move to 7nm technology because they got too comfortable with their strong position and now lack a whole generational gap in their offerings. 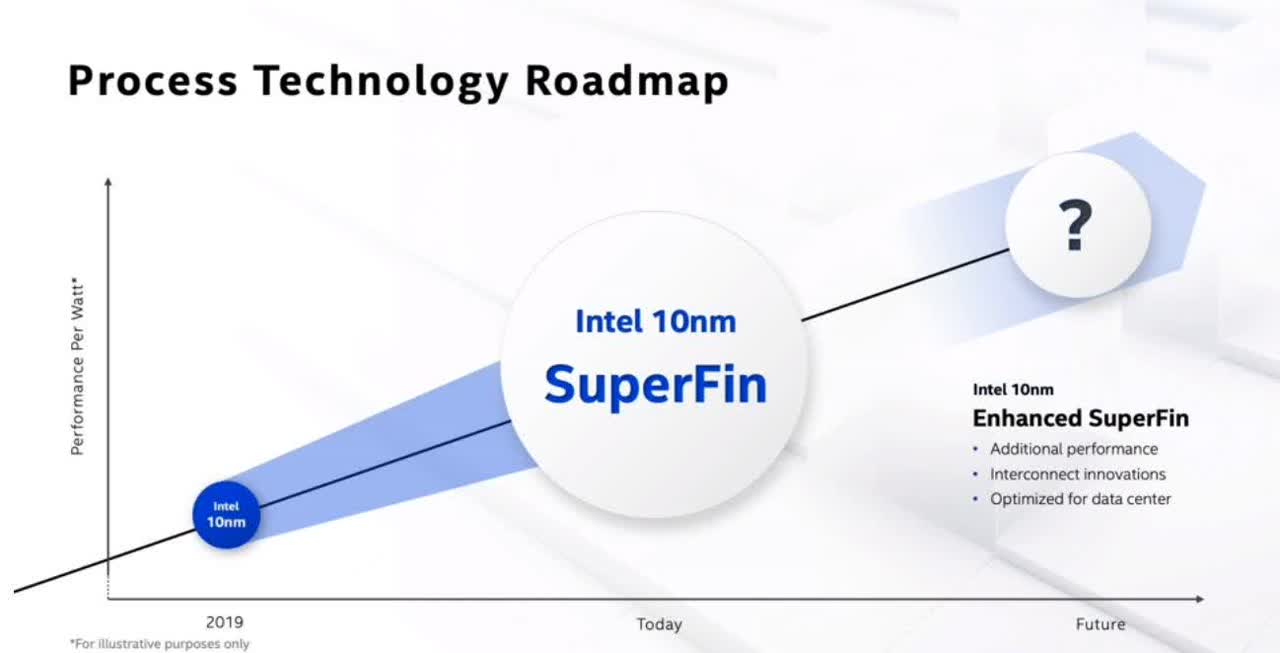 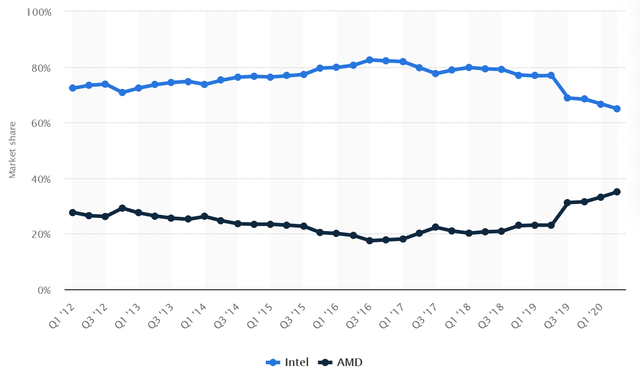 Beginning in 2019, AMD’s market share started climbing, and at the beginning of the year, AMD was even able to gain 40% market share in the x86 category.

The market has had enough of Intel comparisons

I closely follow PC hardware review channels like Linus Tech Tips, Gamers Nexus, Hardware Canuck, and a few others. Until the 11th gen Tigerlake, they all agreed that AMD is just hammering the mobile device market with their 4000 Series based on their 7nm architecture.

With Intel’s newest presentation of the Tigerlake, Intel managed to make a fool of themselves by talking more about their competitor than about their product. 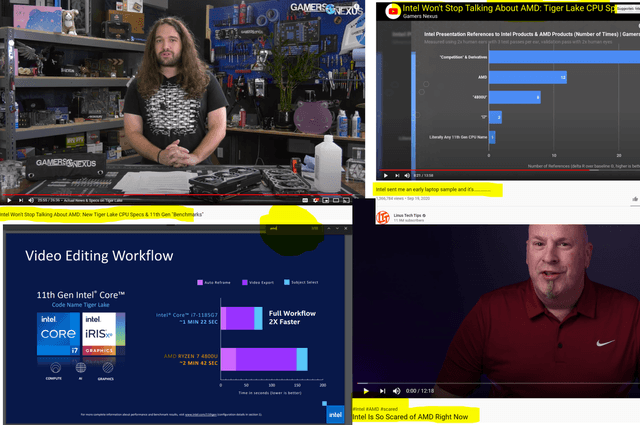 Admittedly, AMD does the same to an extent, but Intel brings this whole thing to an entirely new level. It makes Intel look weak and scared in sight of what’s to come, especially considering their weakness in multi-core performance.

Intel sent out laptops with their new CPU to reviewers. They agree that the single-core performance of Intel’s 11th gen Tigerlake is fantastic, and its integrated graphics is sufficient to play a wide variety of 3D games on an Ultrabook.

I still have a few questions on who Intel is addressing with their new chip, what’s the price point of it, and what’s the battery consumption. These are essential questions that’ll be answered once they officially launch their new CPU.

Who is the Tigerlake for?

The 11th gen Tigerlake shines with its single-core performance and integrated graphics unit, but even so, a dedicated GPU like the Nvidia MX350 outperforms Intel’s integrated GPU. Software that makes use of multiple cores run better on AMD’s 4000 series.

Intel advertises that the Tigerlake is made for everyday users and the most commonly used software. Yes, that’s true, and Benchmark tests verify that statement. But there is another big reason why customers would choose the Tigerlake against AMD’s Ryzen, Laptop Design.

Stated on Intel’s Newsroom, more than 150 designs will make use of Intel’s 11th gen CPU, which offers customers a variety of choices. AMD still lacks in this perspective.

So what’s the result of all the new benchmark tests?

Intel lacks at multi-core performance and programs that make use of multi-core architecture run faster and better on AMD chips, and that’s the problem Intel is facing. It’s just a matter of time when developers will make use of higher core numbers, and distributing the workload across more cores will also reduce the power consumption of the CPU, which is essential for light and portable laptops.

The Intel i7-1185G7 has a lot to offer. Its integrated graphics enables customers to have a laptop that would perform well during everyday tasks and allow them to play 3D games on their laptops. The integrated GPU is not comparable to dedicated graphics cards but performs well enough to satisfy everyday gamers.

For more than ten years, Intel had no real competition in the CPU sector, which mirrors the lack of large generational leaps between their CPUs. With the 11th gen Tigerlake, Intel made a step in the right direction, but its positioning in the light and portable laptop market is still questionable, its price point is unclear, and battery consumption was not stated yet.

With AMD’s 7nm architecture, it definitely has the edge against Intel for the time being. Intel announced in its Q2 2020 earnings that we could not expect a 7nm technology from Intel until 2022/2023. AMD has years to improve on its architecture and processes until Intel catches up.

Considering the growth rate of Intel’s market and its dividend yield, I would not exclude Intel from my portfolio but tend to weigh more in favor of AMD for the long-term view.

I always welcome constructive criticism and open discussions. Please feel free to comment or PM me about my calculations and/or sources that I use in my articles.

Disclosure: I am/we are long AMD, INTC. I wrote this article myself, and it expresses my own opinions. I am not receiving compensation for it (other than from Seeking Alpha). I have no business relationship with any company whose stock is mentioned in this article.

Additional disclosure: Author note: Seeking Alpha offers me the opportunity to articulate my thoughts and share them with other investors to get feedback and create constructive discussions about anything I say. I am not a financial advisor, and the information provided in my articles should not be used to make investment choices. Due diligence and/or consultation with your investment adviser should be undertaken before making any financial decisions, as these decisions are an individual’s responsibility.

Tencent limits how long kids can play its flagship game, ‘Honor of Kings’

Vudu and FandangoNow merge into a single streaming service

The Morning After: Is this the end of the selfie camera notch?